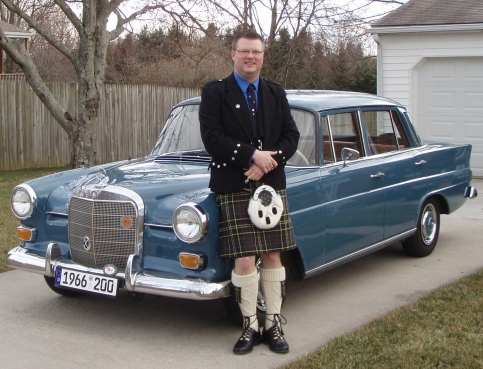 Hi, I’m Jason Barth, Drum Major of MacMillan United Pipe Bands. I’m new to the drum majoring world, as I have been a competitive bagpiper for the past 30+years. I’ve competed successfully at every level of pipe band competition, including several trips to the Worlds.

My solo career climaxed at a three-way tie for first place in the USPF Grade 1 invitational, where I took second. My competitive piping career was cut short when I developed focal dystonia (piper’s palsy) in my left hand almost 20 years ago. My final solo competition was in 2007, where my hand and arm were not able to perform any longer at that level.After spending a life-time committed to piping and to the fostering of cultural pride in our Scottish Heritage, I could not walk away from our community and thus decided to continue on in the role of Drum Major.

As a graduate of Lyon College Scottish Arts Program as the President’s Piper, and having been a Pipe Major of a successful grade 3 band during graduate school in Washington, DC (Dunloggin Pipe and Drums), Pipe Sergeant of MacMillan, instructor for Macmillan-Birtles (winning both Maxville and Montreal in the same weekend), and Pipe Major of Macmillan-Dunn, I have gained leadership experience, in addition to following in the footsteps of our great parade marshal Drum Major David Ricklis (ret).

When not wearing the band kilt, my husband and I enjoy showing our antique cars, petting our cats, and living quietly in the countryside of central Maryland.